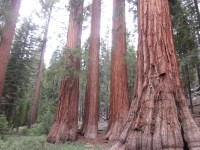 Alert – Upcoming Two-Year Closure:  Beginning July 6, 2015, or possibly later if they’re behind schedule, the park service will be closing the Mariposa Grove for a two-year restoration project. The lower grove and most of the upper grove will be closed, along with the road to the grove. You’ll still be able to hike the outer loop trail, which provides access to some of the trees in the upper grove, but you’ll have to hike there from Wawona or the Fish Camp Snow Play area.

Why Visit Mariposa Grove?  It’s by far the biggest sequoia grove in Yosemite, home to hundreds of the handsome beasts, but the 1,800-year-old Grizzly Giant sequoia is worth the trip all by itself. And Wawona Point offers the best views of Wawona Valley anywhere in the western United States.

Difficulty:  Low for the lower loop; medium for both loops. The popular lower loop is short, but climbs steadily. 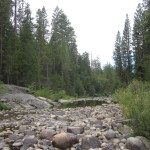 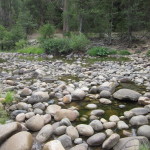 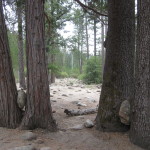 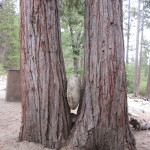 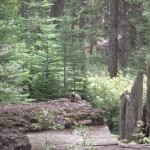 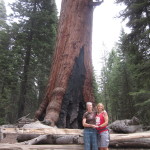 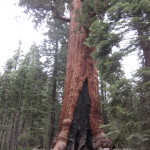 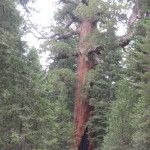 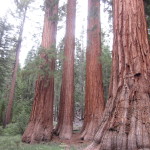 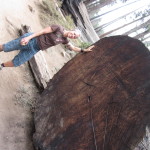 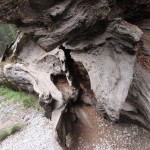 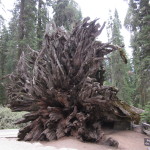 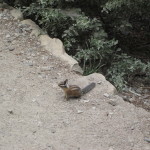 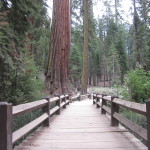 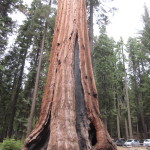 Getting There:  The trailhead is two miles (3.2 km) from Yosemite’s south entrance, and the road is well marked (if you’re entering Yosemite through the south gate, turn right immediately after passing the entrance gate). If the parking lot is full, the road will be closed and guarded by park personnel armed with orange vests, but they’ll direct you to a lot where you can park and take a free shuttle bus the last two miles to the grove. You can also catch the shuttle from the shop around the corner from the Wawona Hotel.

Parking:  There’s a large lot at the trailhead, but it frequently fills up. When it’s full, traffic monitors will block the road off at the park’s south entrance. You can park here instead and catch a free shuttle bus to the grove. You can also catch free buses to the grove from in front of the Wawona Convenience Store, another five miles distant. These buses, happily, will also take you back again. If you’re going up late in the afternoon, check with the driver to see when the last bus will be returning to the park entrance and Wawona.

More useful stuff:  For fifty cents, you can buy a brochure at the trailhead that describes the grove and includes a basic map of the area, but it’s also available from the NPS website as a free PDF download.

Highlights of the Lower Grove

The Fallen Monarch, the first really mind-blowing giant you’ll pass on the trail, is massive, dead, and a bigger legend now than it ever was alive – making it, some say, the Elvis of trees. Unlike the King, though, the Monarch remains available for viewing on the spot where it fell, and hundreds of people each day are photographed in front of its upturned base, which reaches some 15 feet across. The keepers of Graceland would probably get arrested if they allowed this sort of access.

The Bachelor and Three Graces are a quartet of sequoias you’ll pass just after crossing the tram road. The roots of giant sequoias are shallow, usually less than six feet deep, but spread over a large area – half an acre or more for a mature tree. This means that right under your feet, the roots of the graces and their bachelor are intertwining in ways that would easily earn a mature rating in much of the country. But no one seems to mind here; Yosemite visitors are a broadminded lot.

The Grizzly Giant is the grand patriarch of Yosemite sequoias and the clear star of the Mariposa Grove. It’s over 30 feet (9 meters) in diameter at the base, more than 90 feet (27 meters) in circumference, and has a single limb a hundred feet up that’s bigger around by itself than the trunk of nearly any other species of tree. When you pass the Fallen Monarch at the beginning of the hike, make a mental note of its size; now imagine a version more than twice as wide across, and you’ll have some idea of the Grizzly Giant’s girth.

The Grizzly Giant is also an estimated 1,800 years old. This makes it hundreds of years older than Charlemagne, King Arthur, Attila the Hun, and many of the jokes on this website. It was more than a thousand years old by the time Columbus stumbled upon an island off the far shores of the continent it calls home. More than fifty billion people have been born and died during the Grizzly Giant’s lifetime.

How does one put fifty billion people into perspective? One doesn’t. But here’s a shot: if they averaged four feet tall, they’d total about 38 million miles in length. If you could retrieve all their remains, lay them end to end, and then point them out into space, they’d stretch to the moon and back about 75 times. If you handled the first two steps but ran into problems with the pointing-them-into-space bit, you could just lay them end to end on the ground instead, and you’d find that they’d circle the earth 1,500 times.

However you look at it, the Grizzly Giant has outlived a lot. Yet it probably owes its survival to the fortunate fact that Giant Sequoia wood is nearly useless for construction; it splinters easily and is generally suitable for nothing but toothpicks. If not for that, it probably would have been felled by the first loggers to visit the grove, well before the 20th century reared its lively head.

The California Tunnel Tree is about a hundred meters past the Grizzly Giant. It’s the only living sequoia in Yosemite with a manmade tunnel drilled through it. You could probably drive one of those doughty little European minicars through the tunnel, which was carved out for the benefit of tourist-bearing stagecoaches in 1895, but if a Hummer tried it, it would be the end of the side mirrors for sure and possibly the entire car, and would definitely herald some unpleasant legal wrangling for the driver. You are, however, allowed to walk through the tunnel.

Text and get more info from http://www.yosemitehikes.com